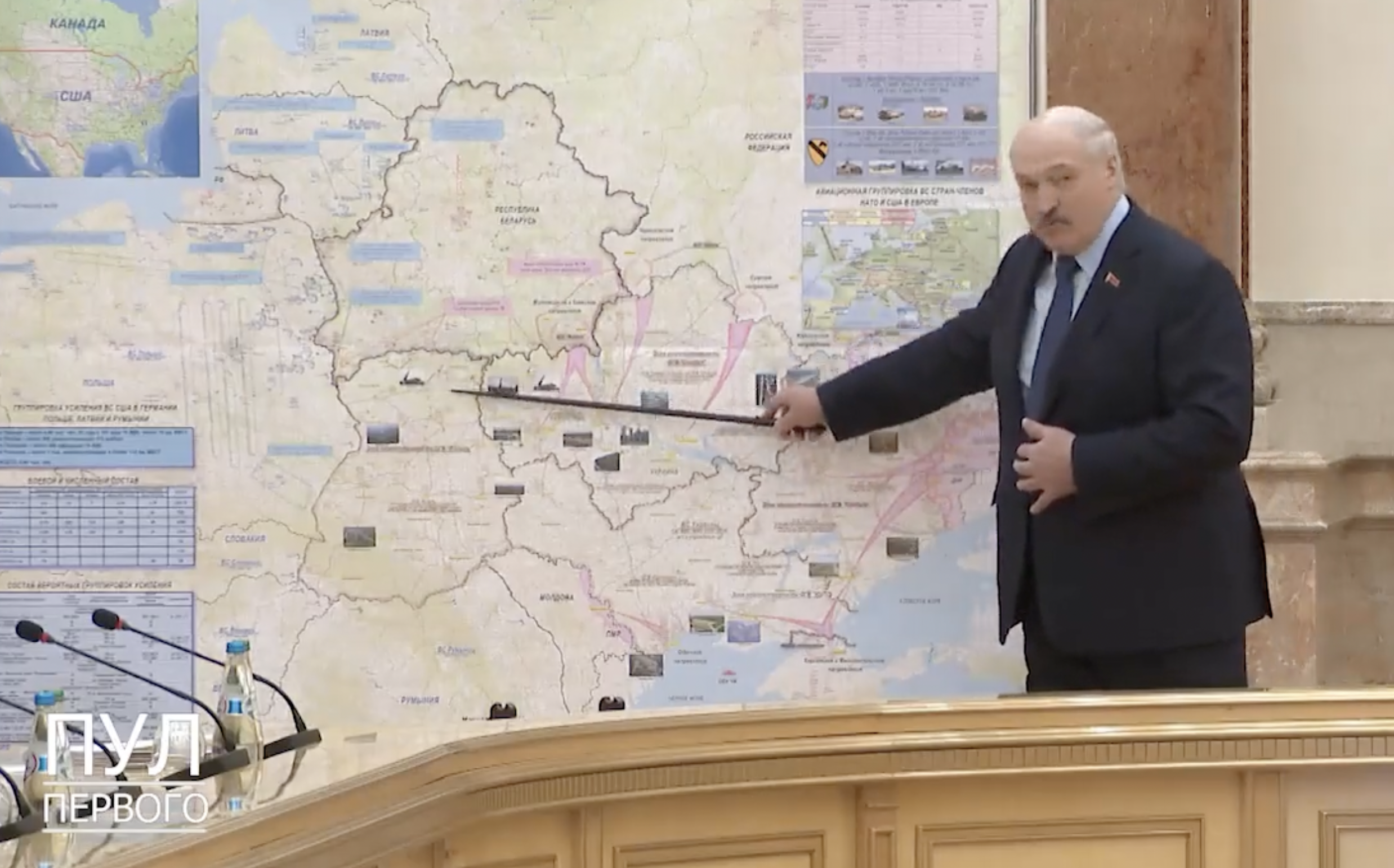 (B2) This is an amazing video from which we have taken screenshots. We see Belarusian President Alexander Lukashenko in front of his council lecturing on Russian and Belarusian intervention in Ukraine.

Belarusian President A. Lukashenko is either a profound imbecile or an ace in the double game. He has just indulged, in a Show of which he has the secret in front of a session of his national security council broadcast on national television, to an explanation of the maps of the offensive. Giving himself a role of chief planner of Russian operations of which he is only an executor. A strong and interesting demonstration in the presence of his Minister of Defense Andrei Ravkov, who appears pale over the demonstration.

An offense from five points

On this map, we can clearly see the Russian offensive unfolding from five points: Russia, but also Belarus in the North; the Black Sea and Crimea (annexed by Russia since 2014) to the South; from the Donbass to the east.

On this map, we also see Ukraine is divided into four zones. The West, with its eight oblasts (provinces) from Lviv to Khmelnytsky, is preserved.

Cutting Ukraine off from its access to the sea

In the South, we can clearly see the objectives: to control the Black Sea, from troops coming from the sea to link up with the troops present in Transnistria, and to cut off the Ukrainian part of the Danube delta. Objective of this offensive, with other troops from Crimea: take Odessa in a pincer movement and conquer the province of Kherson. But there does not seem to be any question of going up towards the West (towards the province of Vinnytsya) or the North (province of Kirovohrad).

In the East, on the other hand, it is clear: we see a double offensive from Donbass and Crimea to conquer not only the whole of the province of (the separatist republic) of Donetsk (towards Mariupol) but also the province of Zaporizhzhya, in particular the cities of Melitopol and especially the port of Berdyansk, but also the province of Kharkiv. We clearly see the Russian will to seize “useful” Ukraine (the East of Ukraine is rich in mineral resources: coal, manganese, etc.), and to cut Ukraine off from its access to the sea.

The capital and the power targeted

But it is in Central Ukraine, around Kiev to Sumy, that the most major offensive is taking place. We are no longer here with a logical objective aimed at preserving the Russian-speaking population (a fallacious argument sometimes used by the Russians) or at consolidating the independence of the two separatist republics of Luhansk and Donetsk (objective of the intervention clearly announced by Vladimir Putin when declaring recognition of these “republics”). We are here in an attempt to destabilize Ukrainian power, to overthrow the elected democratic government of V. Zelensky.

A kind of revenge for 2014 which saw the pro-Russian leader of Ukraine, Yanukovych, flee the capital in the first somewhat serious scuffles. A sort of replica also of the NATO offensive on Libya which had seen the military operation gradually abandon its initial objective (interposition in a desire to repress Gaddafi) validated by the UN, to Undertake (under the impetus of the French and British) an operation to overthrow power in Tripoli, which ultimately led to the “neutralization” of leader Muammar Gaddafi.

NB: contrary to what has been said, there is no attack on Moldova on this map. There is a junction between the troops from Transnistria and those landing in Ukraine.

Football and human rights. The ball is (still) wrong… in Russia

75 days of hunger strike for Savchenko. His release is urgent, says the EU…

Javier Solana: Russia welcome to Eulex Kosovo if it wants