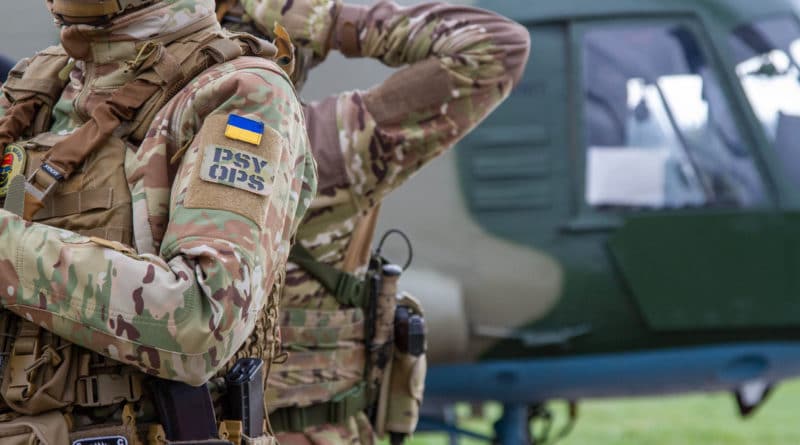 (B2) Whatever the turn of events on the outskirts of Ukraine, end of maneuvers and withdrawal of Russian forces from the outskirts of the border, redeployment, or offensive, even limited, we must never forget the Maskirovka. The art of camouflage or decoy, an old Russian practice.

A proven practice over time

During World War II, the Red Army drove its trucks around in circles to make it look like more forces were there and make the enemy hesitate. This allowed him (sometimes) to overcome certain weaknesses. In 1956, during the intervention in Hungary, the Soviet forces pretended to withdraw; on November 1, the tanks deployed in the capital Budapest even left. It is to better come back a few days later, largely reinforced. Today, this tactic is still at work. It can sometimes be difficult to discern Russian intentions. It's desired.

The law of maximum harassment

The strategic ambition is clear: to restore Russia to a leading position (read: Escalation of the verb between Russia and the West. What is Moscow looking for? What about the invasion of Ukraine?). At the tactical level, this translates into a fairly simple principle: maximum harassment, political as well as military, media and cyber. The Russians intend to come to all areas where they have an interest, and where Westerners, and in particular Europeans, are there in various ways. Around their near abroad first of all (Belarus, Moldova, Ukraine). History to 'crack' the Ukrainian power. But also elsewhere: Syria – where it intervenes openly, militarily, alongside the power of Damascus, bound by a cooperation agreement –, Africa (Central Africa, Mali, Burkina Faso, via private Wagner or others). And in the internet as well.

Some recent examples of the maskirovka

This Maskirovka, Europeans and Westerners have already paid the price in recent years.

Precedents in Georgia and Ukraine

The intervention in Georgia in the middle of summer 2008, the day of the opening of the Olympic Games, remains in the memories. So she surprises her world with her speed. The Russian advance is not as effective as desired in purely military terms (logistics at half mast, broken down vehicles, radios that do not pass between the various intervention units, etc.). But it is a political victory. Bis repetita in 2014, the intervention in Crimea by green men is much more established on the Russian side, like the military support provided to the “separatists” of Donbass. On the western side, they were not really anticipated. The Alliance admitted this after the fact, acknowledging that it had failed to interpret certain weak signals (read: Merlin, NATO's new information tool).

The lure of the association agreement with the European Union

At the time, in 2013-2014, the Russians took great care to hide their intentions from their interlocutors in charge of Eastern Partnership policy (European Commission and EEAS in particular). The smokescreen erected by Russian diplomacy — and Sergey Lavrov (the Minister of Foreign Affairs) in person — in the fall of 2013 had one objective: to send the message to Europeans that they were certainly not strongly disagree with the European Union's plan to sign an association agreement with Ukraine. But that it was a political and economic disagreement, that their objective was above all to keep Russian companies access to Ukrainian markets.

... Are the days of military interventions over?

The Europeans had learned as a lesson that the " time of military interventions Russian was over, as a European diplomat very well introduced to B2 said at the time. A few weeks later, Russian troops took possession of the Crimean peninsula and Sevastopol, a strategic point on the Black Sea, in a masterfully executed operation. The Russian decoy had worked perfectly. What my interlocutor will recognize half-word later. NB: the decision of the Ukrainian leader Yanukovych to go back on this signature will be one of the causes of the “revolution” of Maidan, and of its overthrow.

The minimization trend at work in Syria

Sometimes there is not even a need for a great Russian action of intoxication. It is the Westerners themselves who strive to minimize the Russian will. When, in September 2015, Moscow threw its forces into the Syrian conflict alongside Bashar-el-Assad, some Western officials barely believed in a lasting settlement and a reversal of the situation. I remember a very informal discussion with a French military intelligence official who downplayed the episode, insisting that Russia did not have the military means to stay too long. We see the result today. Bashar's regime has consolidated its power and reconquered a good part of its country, thanks (in part) to the Russian air force (helicopters and planes).

… but also in the Central African Republic

When the Russian Wagners arrived in the country, at the end of 2017, beginning of 2018, the comments were also remarkable. They are " just a few hundred “, then tells me a soldier. And they are not not in Bangui ". The Russians have indeed settled in Bobangui, 65 km from Bangui, in the former presidential palace of Bokassa. And they " do not take care of the same tasks » that the Europeans of the European Union training mission EUTM RCA. A way of reassuring yourself, no doubt. Four years later, we see the result. The Wagners are present, more numerous than the European soldiers, who have, for the most part, packed up.

The effect of sanctions maximized

Another example of auto-intoxication: the European and American sanctions taken against Russia after the intervention in Crimea in 2014. They are not negligible, hitting several economic sectors (banks, weapons, etc.). The Europeans are convinced, at least this is the message they send to the press, that this will " kneel » the Russian economy, provoke a revolt of the population and difficulties for the power. The Russian economy has indeed suffered. But she did not provoke the sequel. Fatal error.

… with a big omission: the faculty of resilience Russian

The whole European (and American) tactic consists in threatening to " hurt to Russia, especially its economy. A very western notion in fact. On the Russian side, we react rather with an oriental passivity. If the objective is strategic, it does not matter if there are some losses " collateral ". Russian power has the advantage over Westerners of having both a public opinion accustomed to drama, resilient, and more easily controllable than in the West. In fact, even possible economic sanctions pronounced by the West, can contribute to the strategic objective of the Kremlin. By dissociating the links between West and East, by forcing Russian oligarchs and companies to look elsewhere for lost markets in the West, they are in fact favoring what some would call… Russian strategic autonomy.

A new maskirovka tactic in action

Today, we can really wonder if we are not witnessing a new version of the Maskirovka. More media.

A 'noise' in the area

Contrary to the past, the Russian authorities today do not seek in any way to hide their intentions vis-à-vis Ukraine. He makes them so obvious it's suspicious. The movement, which could not be louder, of soldiers along the Ukrainian border should incite suspicion. In the past, military interventions have never been preceded by such a carpet of media bombs. And the Russians have, since 2008 (and the intervention in Georgia), opted for a tactic of movement, with small mobile groups, made up of soldiers in uniform or semi-private personnel, leaving aside the classic offensive tactic, massive and heavy.

A possibility of limited intervention retained

The Russian temptation to pounce on Ukraine, especially around Crimea, or Donbass, or between the two (Mariupol), should not be ruled out. Thanks to a provocation, the Russians would be quite capable of effecting a turning movement, by sea, for example. They could also very well decide to stay permanently on the land of Belarus, for " protect "their neighbor of all" NATO offensive and thus lock the borders of the Alliance. etc Russian power actually has several cards in hand.

After having played bluff with the Americans, the Russians could withdraw, a little, even completely in a brutal way… End of the exercise, they will say, as planned. It will then be easy for them to demonstrate that the reinforcements brought to the eastern borders by several Allies (USA, United Kingdom, in particular) are “ threatening ". And that it would therefore require a permanent presence as reinforcements for the Belarusians.

The weakness of Euro-Atlantic solidarity with Ukraine

It will also be easy for them to highlight the weakness of American solidarity with Ukraine. The panicked US withdrawal of not only diplomats from the US Embassy in Kiev, but also military assistance — without a single shot fired — will be remembered (read: The departure of Americans from Ukraine. Foolish and cowardly).

We can also ask ourselves about the very good information distilled by the Americans (and the group of Five Eyes bringing together Anglo-Saxons) to the media. Information rather vague finally. And very little shared with other intelligence services, in fact. This should prompt some caution. The same type of “non-sharing” of information had taken place… at the time of Iraq, and the famous secret and massive weapons of Saddam Hussein. This does not mean that the intelligence does not exist. But that it must be taken with tweezers.

The US announcement of a Russian invasion of Ukraine on Wednesday (February 16) raises doubts. We have never seen a surprise attack, announced so precisely in advance. . Be serious. If it is real - and there is not an American bluff to make a political coup - this information seems to have been taken from a good source, in an entourage close to the Kremlin. But it is never excluded in this type of intelligence battle to try to influence the other party through a good source manipulating the other. In short, that the famous American mole infiltrated deep into the Russian state, has been returned to give other information. If that were it, then we would be in a vast operation of Psy Ops which will be remembered in all war schools... or which could be used for a good political fiction-reality novel.

Article reviewed on the form (chapo and introduction) 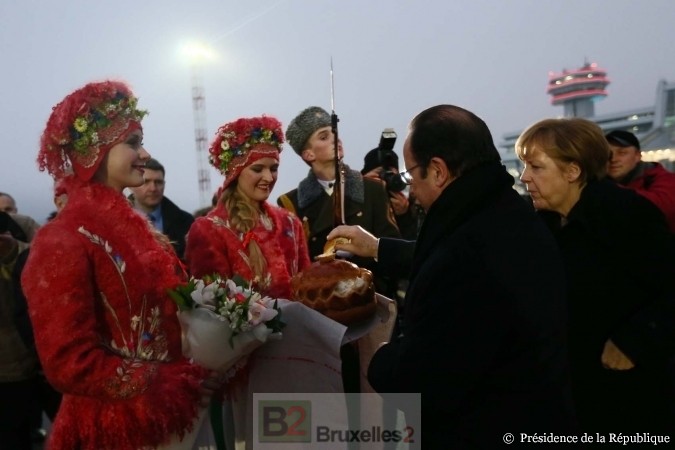 The main elements of the new Minsk agreement. An armistice, not (yet) peace (shift)

Open to the East, to Russia 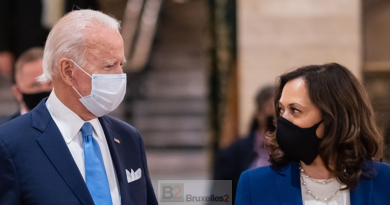 The new US foreign policy, according to Joe Biden