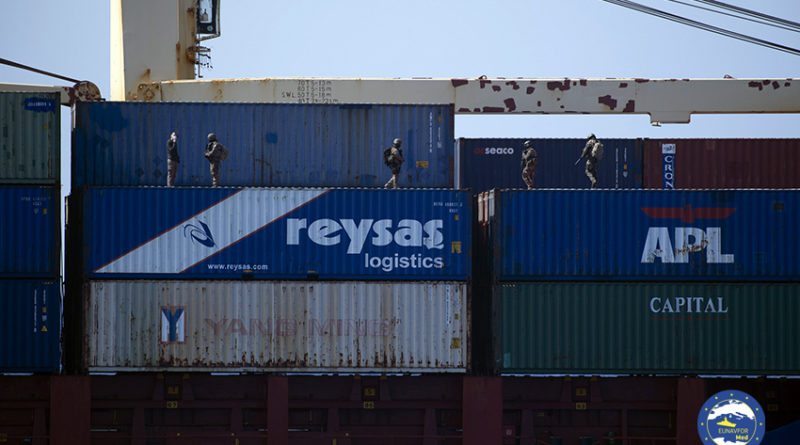 (B2) Two ships were inspected in quick succession in the first days of April off the coast of Libya. One by Chief Petty Officer L'Her, the other by the Berlin. Both engaged in the European operation to monitor the UN arms embargo (EUNAVFOR Med Irini)

The first inspection was made by the German support ship Berlin (A1411) Friday (April 2). the Queen Sara, a freighter flying the flag of Sierra Leone, was targeted. He came from Turkey and was bound for the Libyan port of Khoms (between Tripoli and Misrata). He was formerly named Perelik. But it was not German sailors who boarded. It was the Lithuanian visiting team on board who boarded. A first for the Lithuanians as for the Berlin (as part of Operation Irini). " No prohibited material was found » and the crew of the merchant ship has « always been cooperative during the inspection we are told at the HQ of the European operation in Rome.

The next day, Saturday (April 3) at dawn, it was the turn of the French to intervene. The high seas patrol boat, Chief Petty Officer (PM) l'Her performs a visit operation on the Medkon Izmir, a container ship belonging to the Turkish company Medkon Lines, which sails between Turkey and Libya. The ship, flying the Panamanian flag, accepted the visit “ after several minutes of questioning by radio “, indicates the French Navy.

This is called a " cooperative inspection ". The French visiting team—composed of sailors from the patrol boat as well as marines from the on-board maritime defense and interdiction team (EDIM)—came on board. The visit begins with securing the vessel and its crew (the procedure), then the flag inquiry and the document control " of the ship. Once these formalities have been completed, the team then begins to search the premises and the containers transported.

It takes about five hours to complete the container check, in “ reason for the volume of cargo transported ". The 292 containers carried by the ship were not searched. Only 32 containers are — those that “ were accessible ”—, or 11% of the total cargo. " Access to containers is the main difficulty of this type of operation due to the height of the stacks of containers, the restricted space, and their layout “says the French navy.

Finally, " no suspicious material has not been found, indicates Irini's operation headquarters in Rome, which specifies: " All recommended precautions against COVID-19 have been observed ". This is the eleventh inspection of its kind. The French high seas patrol boat, present in the operation since February 12, must complete its mission on April 28.

A French Awacs as reinforcement for eight hours in Operation Irini 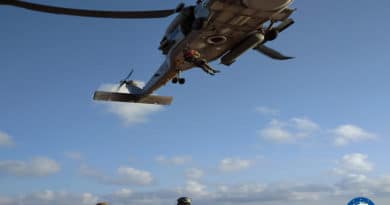 Control of the Libyan arms and oil embargo. The latest assessment of Operation Irini 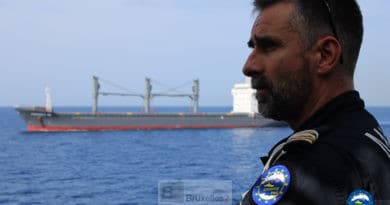 One thought on “Vessel inspections continue off Libya. Chief Petty Officer Her and Berlin in action"