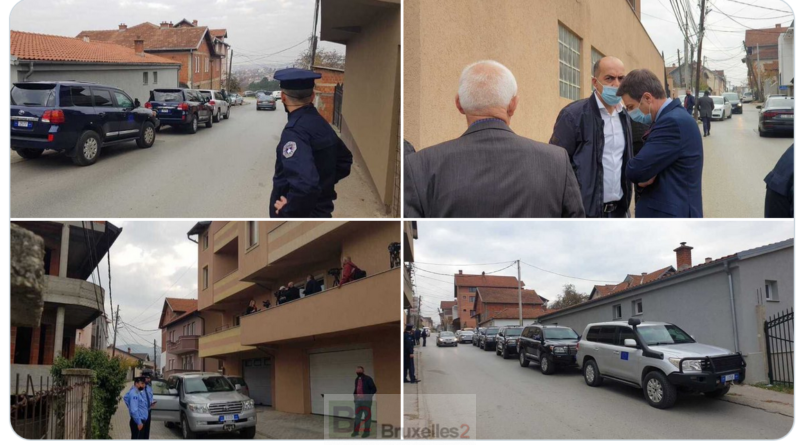 The searches which began on Wednesday (4.11) continued on Thursday and Friday (5 and 6.11). The Specialized Chambers shelling out the people arrested over the hours

The Special Prosecutor's Office (SPO) conducts continuous operations in Pristina “, the capital of Kosovo, he announced in the early morning, at 8:17 am, this Wednesday (November 4). These OPS operations are supported by the Kosovo Police (KP) and the European Union Rule of Law Mission in Kosovo (EULEX) “, specifies the press release, without saying more (for the moment). " More information will be given later. »

Related to the June indictments

Last June, the Special Prosecutor's Office struck hard by indicting both Kosovar President Hashim Thaçi and the leader of the Democratic Party of Kosovo (PDK) Kadri Veseli, but also " several other suspects » unnamed. It could be towards these, according to our information, that the Kosovar and European police officers would turn. Our Balkan colleague Birn (Balkan Investigative Reporting Network), specializing in war crimes investigations, has already indicated ongoing searches at Jakup Krasniqi's home.

Searches have, in fact, started from 6 a.m., Wednesday, at the home of Jakup Krasniqi located in the Velania district of Pristina, confirms thee media online Kosova Post. A raid was also carried out in another of his residences in Negroc (Drenas, in the suburbs of Pristina). THEformer KLA spokesperson (the Kosovo Liberation Army) during the civil war and former President of the Assembly (from 2007 to 2014) and " has been isolated in a separate room and has been questioned since this morning “, indicate his relatives according to another media Lajmi.net. Kosovar journalists and televisions already on site.

Jakup Krasniqi detained in The Hague

Former KLA spokesman Jakup Krasniqi was indeed " arrested and transferred to the detention facilities of the Kosovo Specialist Chambers in The Hague “, announced the Chambers, Wednesday evening around 23 p.m. An arrest made pursuant to a confirmed indictment for war crimes and crimes against humanity, and a warrant of arrest and transfer order issued by a Pre-Trial Judge)” of the Chambers, it is specified. " Further information will be provided in due course. ", including information on the publication of the indictment, " with redactions if necessary ».

Two other men — Kadri Veseli, the current leader of the PDK, and Rexhep Selimi, the founder of the Kosovo Liberation Army (UCK) – were also arrested and transferred to The Hague, explain the Chambers, Thursday evening around 21:30 p.m.

But it is above all the news of the resignation announced Thursday (5.11) of the President of Kosovo, Hashim Thaçi, his arrest and his " a transfer in detention facilities of the Kosovo Specialized Chambers in The Hague, which were a striking sign of a sort of end of a page that is turning in Kosovo.

We are not, here, in small crimes. The indictment states: crimes against humanity and war crimes “, aiming in particular “ murder, enforced disappearance of people, persecution and torture », carried out during the war of independence of Kosovo in the years 1990-2000. Acts committed on a large scale. The defendants are considered by the judges of The Hague as " criminally responsible for nearly 100 murders ". And in total (disappearances, acts of torture included), these are " several hundred victims towards the three main communities in Kosovo (Albanians, Serbs, Roma) without forgetting the political opponents who are targeted. (Read : Kosovo special prosecutor strikes hard: Thaci and Veseli, former KLA leaders, charged with crimes against humanity)

The Specialized Chambers and the Special Prosecutor's Office were created in 2015 by the European Union to investigate and judge crimes against humanity, war crimes and other serious crimes under Kosovo law. The scale of the crimes, the sensitivity of the persons implicated, as well as the pressure on witnesses, justified the creation of a Kosovo justice system relocated to The Hague. Their funding is largely provided by the EU budget under the CFSP (Common European Security Policy).

Arrests of terrorists in Kosovo