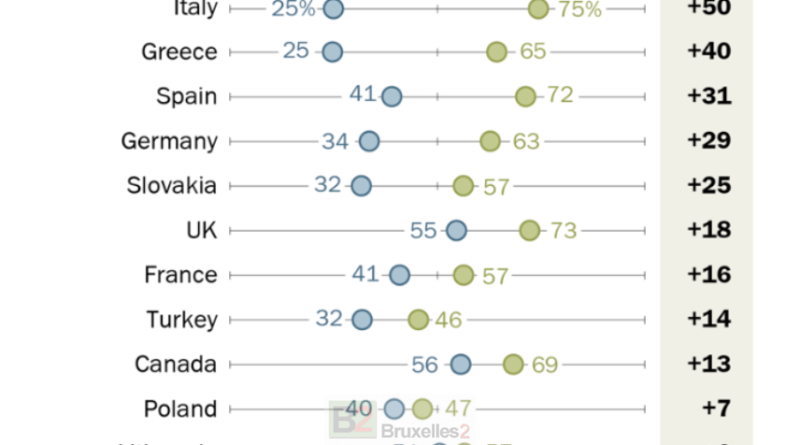 (B2) Citizens of the Atlantic Alliance have a generally positive view of the organization, reveals the poll carried out by the Pew Research Institute*, published on Tuesday (11 February). But it also shows that their commitment to collective defense is very shaky. Even non-existent, if not towards the United States. Details

The poll results come from a survey conducted in 19 countries, including 16 NATO member states, Sweden, Russia and Ukraine, of 21 people in the summer of 029.

A largely positive view of the Alliance 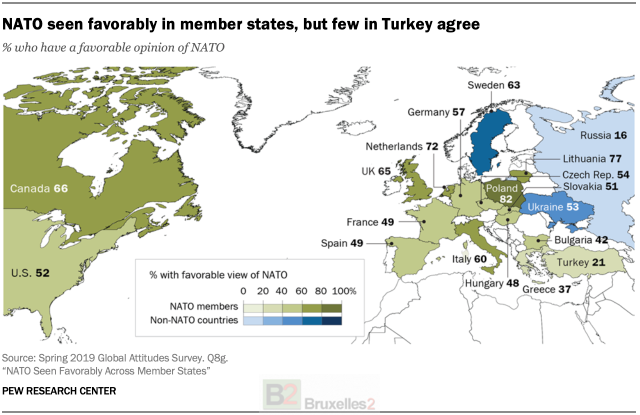 Overall, the Alliance is seen " favorably by public opinion in its Member States. A feeling shared as much in Europe as on the other side of the Atlantic.

Among the members, Turkey is nevertheless a 'spot', with only 21% of public opinion in favor of the Alliance. Greece and Bulgaria are also at the bottom of the basket (37% and 42% respectively). On the other side of the spectrum, we find Poland and Lithuania, which rely heavily on NATO for their defence, and where it is particularly supported. In Poland, it is 82% of the public who welcome it and 77% in Lithuania. Opinion remains mostly positive in the Netherlands, the United Kingdom, Italy and Germany, while it drops below 50% in the Czech Republic, Slovakia, France, Spain and Hungary.

Among non-member states, the picture is more mixed. Sweden and Ukraine support the Alliance, at 63% and 53% respectively, but this is, unsurprisingly, not the case in Russia. Only 16% share this opinion, offering the lowest percentage, and 60% of the opinion said they were unfavorable to the organization.

The United States to defend the Alliance 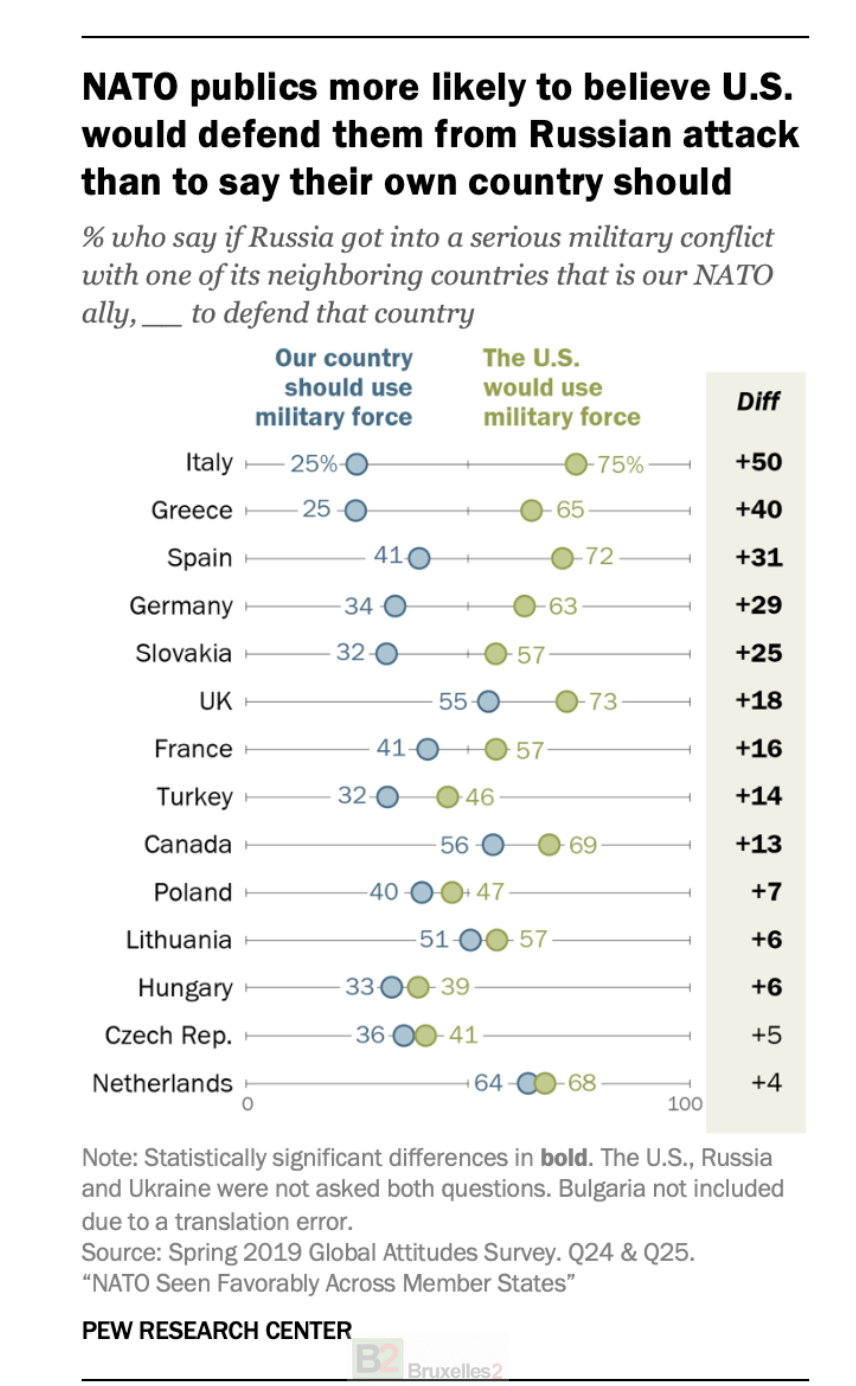 In the event of a potential Russian attack on an Ally, public opinion within NATO largely relies on the United States to defend them.

Public opinion overwhelmingly believes that the United States " would come » Defend their Allies with military force. While on the contrary, they are a majority to think that their country, does not " should not do so, thus placing all responsibility for the defense of the Allies on the United States. 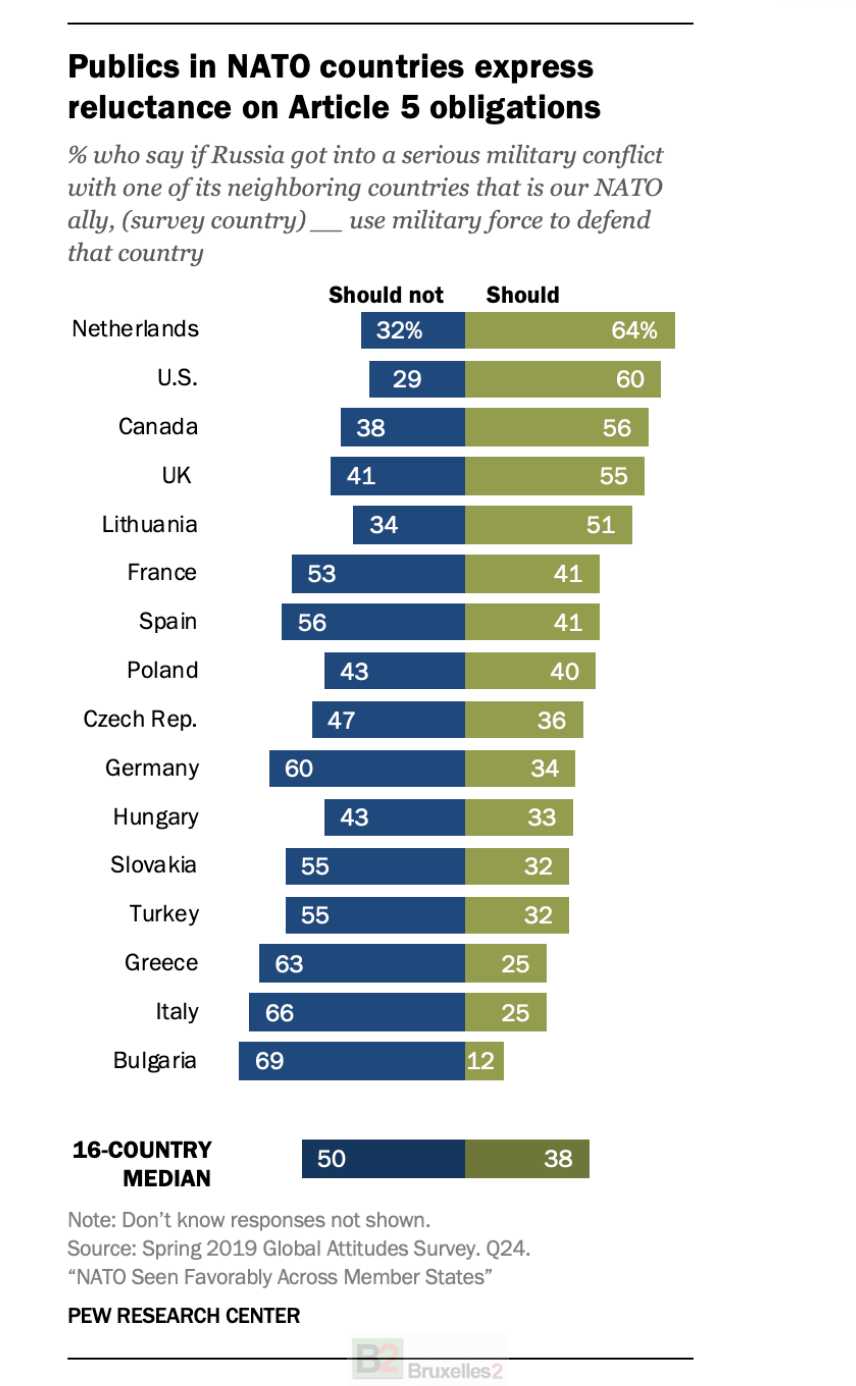 In 11 of the 16 NATO member countries surveyed, public opinion believes they should not use force to defend an Ally against Russia. It's a slap in the face taken by Article 5 of the North Atlantic Treaty, which promises collective defense in the event of an attack on one of the Allies.

Very few people think that their country " should also intervene to defend his Allies. The most reluctant are in particular those who largely believe that the United States would intervene, such as the Italians (25%) and the Greeks (25%). But also Bulgarians (12%), Turks (32%), Slovaks (32%), Hungarians (33%), Germans (34%), and Czechs (36%). In some states where the culture of military mutual aid is more present (in Canada (56%), in the United Kingdom (55%), in the Netherlands (64%), in Lithuania (41%)), the public thinks majority that their country should intervene.

Opinion is nevertheless more divided in France, Spain and Poland.

Willingness to help has declined, notes the Pew Research Institute. For example, almost half of public opinion said they were ready to commit to Article 5 in Italy in 2015, compared to 25% in 2019. Likewise, willingness has dropped in Poland (-8 percentage points) , in Spain (-7) and in France (-6). While it increased in the UK (+6).

The use of force necessary to maintain order in the world

Among the members of the Alliance, the use of military force to maintain order in the world remains largely seen as an option. Only Bulgaria stands out clearly from the crowd, only approving military strength in this framework at 38%. Germany (47%) and Lithuania (48%) are also below the majority. The most favorable are rather the opinions of the major military powers: the United States (78%), Canada (71%), the United Kingdom (71%), Turkey (71%), the Netherlands (69 %) and France (64%).

*The Pew Research Center is an independent Washington-based research center that conducts surveys on various topics.

“The Georgian Tragedy” by Salomé Zurabishvili

Rebels=Taliban=Al Qaeda, the simplistic and losing equation? of NATO

Priorities of the CS presidency: cooperation with NATO