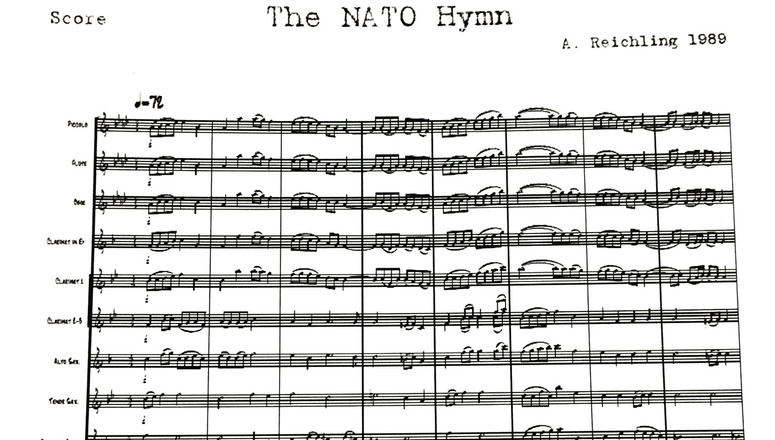 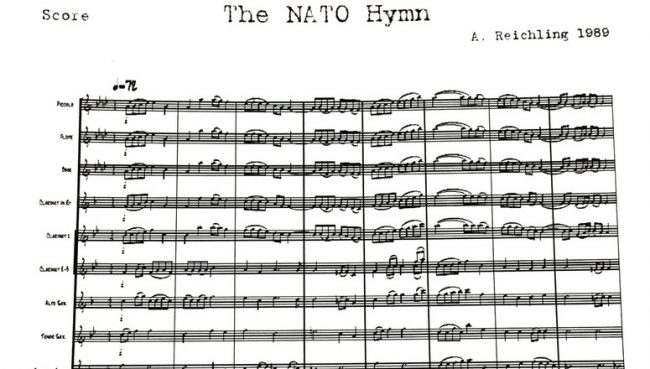 (B2) The Atlantic Alliance can now be expressed in musical notes. NATO has, in fact, adopted its official anthem " for the first time in its history says a press release from the Alliance published earlier this year.

This anthem, lasting 1'30 written by the former conductor of the Luxembourg Military Band, André Reichling, is marked by a clear presence of brass instruments (three saxophones, two cornets, two trumpets, three trombones, 1 tuba, 1 horn, 1 baritone horn) and percussion (snare drum). A few wind instruments (piccolo, flute, oboe, three clarinets) attenuate its martial side giving it a rather pleasant air to listen to. You could almost hum it in the morning in the shower.

A little tune to hum?

Twenty musical instruments have, in fact, been summoned according to the official version. We find rises in range, quite close to the canons of Pachenbel, marked by breaks in tonality, with a slightly nostalgic zest of God Save the Queen, giving it an almost sweet air, and a little Italian chamber music side. Not entirely surprising for anyone who knows the composer. Now retired, with the rank of lieutenant-colonel, André Reichling has indeed arranged numerous compositions by artists as varied as Rossini, Gershwin, Strauss, Mendelssohn and Dvorak.

Without words to avoid hiccups

This anthem has no words. This guarantees it a certain universal character and avoids many musical ... and diplomatic hiccups. This avoids asking the question of the text to accompany – which would still have required long years of palaver – or the language. From a practical point of view, this above all facilitates its interpretation. No need to summon choirs or force the “officials” to sing it.

A long series of inconclusive trials

This decision puts an end to a long vacuum. This is not, however, for lack of testing. But these have not really been conclusive. The first proposals, listed, for a NATO anthem date back, in fact, to the end of the 1950s, for the preparation of the tenth anniversary of the Alliance.

En 1959, new try. An orchestra and choir perform a NATO Tenth Anniversary “Nato Song” composed by Captain Hans Lorenz of the German Air Force, with lyrics by Dutch captains, Stephanus van Dam and Leon van Leeuwen ( in English and German). The partition don't pass the mark of the years... 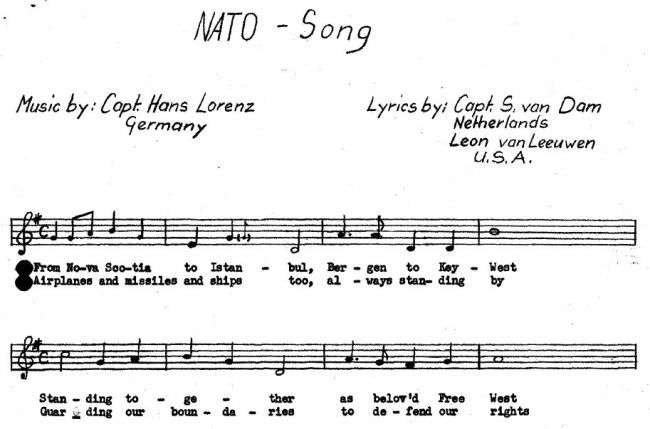 The organization is not really hot. Thus a certain Mrs. Knollmann from Virginia who had proposed a “NATO nations” composition for the command of Norfolk received an end of inadmissibility. " Unfortunately, the Organization is unable to accept or recognize any anthem as the official NATO anthem. The same position is applicable to the various NATO commands, in particular the Allied Command Atlantic in Norfolk, Virginia. is it written in a missive preserved in the archives of the Alliance. 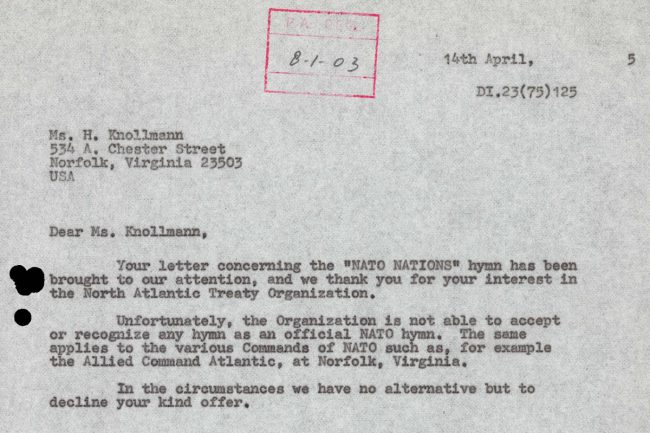 En 1960, it is the chief of the air force of the United Kingdom, Sir Edward Chilton, himself who sticks to it. It features a NATO anthem arranged by Squadron Leader JL Wallace, combining in a kind of “pot pourri” the fifteen national anthems of NATO member states at the time. This does not really convince everyone.

En 1989, the composition of Captain Reichling, produced for the fortieth anniversary of NATO, has a happier fate. Its composition becomes de facto the NATO anthem. It is thus played many times, during NATO events, for example during the accession ceremony of Albania and Croatia in 2009 (see here program) or at the last summit (in the presence of Donald Trump) in May 2017. But to take the official step, it will still take time, almost thirty years for the Alliance to decide to officially make it its anthem.

(1) A character! Born in 1886, married to a German of good nobility, Henrietta von Shickandantz, Thomas Hildebrand Preston was appointed British vice-consul in Yekaterinburg in Russia in 1913. The Russian civil war made him leave. He evacuated to Vladivostok to carry out intelligence duties there in 1919. After returning to his native country, he returned to (Soviet) lands, as British consul in Petrograd / Leningrad, in 1922, he remained there until the break diplomatic relations in 1927. He was appointed in 1929, consul in Kaunas to the Lithuanian government. A position he held for more than ten years. At the very beginning of the Second World War, he helped several hundred Lithuanian Jews to flee to Palestine, providing them with travel documents, more or less legally, via Turkey. He will then be stationed in Cairo from 1941 to 1948. 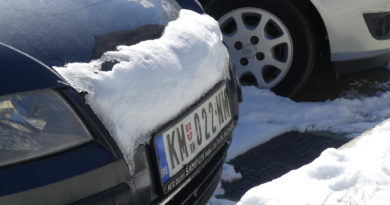