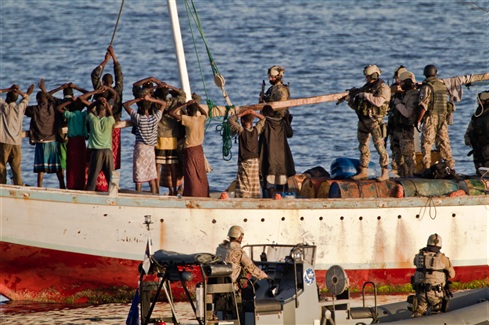 Captured by pirates, the Hanjin Tianjin was recovered by South Korean "marine" commandos. He had been captured the day before by pirates 250 miles east of Socotra (Yemen). The 20 crewmen who had taken refuge in the “citadel” of the ship are safe and sound. However, a reconnaissance carried out by the Turkish NATO ship, the Giresun, had not noticed anything abnormal. The pirates had already fled it seems. And the arrival of the South Korean commandos confirmed it. A few miles away, the pirates had successfully set their sights on the Italian ship. So it could be a diversion.

The Italian freighter MV Rosalia D'Amato was captured by pirates in the early hours of the morning, about 350 miles southeast of Salalah (Oman). A single skiff was enough to overcome this 74.500 T vessel which was going from Paranagua (Brazil) to Bandar Imam Khomeini (Iran). Crew of 21 sailors on board (6 Italians, 15 Filipinos). Two warships, Italian and Turkish headed for the area. 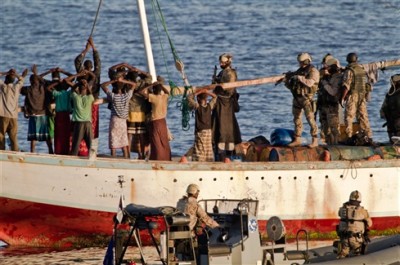 The 18 suspected pirates arrested by the Finnish frigate FNS Pohjanmaa on April 6 were released, "for lack of evidence", and above all the possibility of prosecution. Finland did not want to exercise its universal jurisdiction (this was, moreover, one of the prerequisites for its participation in the anti-piracy operation). Several other States have been approached, without success. " None was determined to prosecute them or could provide an intention to prosecute them within a reasonable time.. Kenya refuses any new welcome. Singapore, the flag State of the attacked vessel, was also questioned. But the existence of the death penalty posed an additional problem. The pirates were, in fact, strongly suspected of having attacked the day before their arrest the Mv Pacific Opal. They were deposited near the Somali coast. Their mother ship had been sunk by the Finnish military.

While patrolling the Somali coast, the Danish NATO frigate Esbern snare discovered a suspicious boat towing a skiff. As it approaches, the Danish sailors observe some throwing objects into the water and taking the skiff. Exchanges of fire took place. “In self-defence” specifies NATO, which does not give an assessment. At least 3 people died in this attack which took place near Hobyo, the pirate port, points out the NGO Ecoterra which revised the balance sheet upwards on Sunday (6 dead including an Iranian sailor and 5 injured). The dhow sank following the shots. The 14 Iranian sailors repatriated to Galkayo, the capital of the semi-autonomous province of Galmudug.

Wednesday 20 April). The Hawks on deck.

On the sidelines of the Dubai conference, the authorities of Puntland and Somaliland signed a memorandum of understanding with the Seychelles authorities to facilitate the transfer of pirates tried in the Indian Ocean archipelago. He confirms the letters of intent signed at the beginning of February in Port-Victoria. Despite some reluctance, the MoU signed by Somaliland also covers all pirates and not only those from Somaliland, Seychelles Interior Minister Joel Morgan confirmed to the daily Nation. The negotiations lasted until the last moment and were particularly “intense” said the Minister. The agreement was concluded under the auspices of the Danish ambassador Thomas Winkler who chaired working group 2 (legal questions) of the contact group on piracy. Also read: Latest piracy news (April 2) • Seychelles signs repatriation agreement for convicted pirates

The Spanish Frigate Santa Maria departs from the naval base of Rota (Cádiz) towards the Gulf of Aden to take over from the frigate “Canaries”, which participates in the European Union's anti-piracy mission Atalanta.

India's Maritime Minister, Vayalar Ravi, told Indian press that the Indian government will not give in to the offer of exchanges by Somali pirates who still hold 7 of the 15 Indian crew members of the MV Asphalt Venture.

Nine suspected hackers arrive at Eindhoven's military airport to be tried by a Dutch court. They are brought to the Netherlands for shooting Dutch Tromp Marines during an operation to liberate an Iranian ship. They had been apprehended after the rather eventful release of an Iranian dhow in early April, in concerted action with the Danish navy. 2 pirates had been killed in the exchange of fire and 3 others wounded. 7 of the 16 pirates arrested were released, either because of their young age or because they were not involved. They passed through the Seychelles where they were placed in temporary detention, the time of transfer to the Netherlands. Read : Latest piracy news (April 17)