Decision expected for March 28 in Kenya. All piracy cases in Kenya — 7 in all involving 57 people — are currently adjourned sine die. The verdict of the High Court of Appeal is awaited on the decision taken last year by Judge Mohamed Ibrahim to declare himself incompetent to try the alleged Somali pirates, (read: A judgment of principle that sows trouble: the High Court of Mombasa releases 9 pirates). The Court of Appeal hearing is now scheduled for March 28.

Thursday (March 17). New Zealand refuses a frigate. New Zealand Defense Minister Wayne Mapp declines a United Nations request to provide a ship for anti-piracy patrols off the African coast. There is "too much to do now to send one of our Anzac frigates” he explains to the national media.

Thursday (March 17). The MV Hannibal II released. The chemical tanker which had been held by the pirates since November 11 has been released. The ship is heading under the escort of the French frigate Guépatte towards Djibouti. Before the frigate was close to the ship, several teams were airlifted: a security team, quickly joined by a medical team, responsible for providing medical and psychological assistance to the 30 sailors who had been captive for four months, then a technical team responsible for check and repair their machines. The 30 crew members (Tunisia, Philippines, Croatia, Georgia, Russia and Morocco) are doing as well as possible, according to the owner. A $2 million ransom was paid, he said. NB: one of the crew members had been evacuated on December 17 on a substantiated suspicion of appendicitis.

Wednesday (March 16). Pirates from 11 to 15 years old! Indian authorities find that among the 61 pirates arrested on Saturday (read: Indian Navy dragnet: 61 pirates arrested in one take) are 25 minors under the age of 15. “At least four are just 11 years old or around,” Indian investigators told the local press. Usually, minors had been apprehended, but never in such large numbers, and never so young. This will pose an additional problem for the prosecution of pirates.

Wednesday (March 16). The Tromp recrosses the Suez Canal. This is the third time in a few days that the Dutch navy ship has passed the channel that separates the Mediterranean from the Red Sea and the Indian Ocean. Came first for the anti-piracy operation of the EU and then of NATO, the Hr Ms Tromp had been ordered to return to the Mediterranean to take part in the Libya relief operation and a possible maritime blockade operation. One of his helicopters with 3 crew members had been taken prisoner by the Libyan forces and then released (read: They are free ! The 3 Dutch servicemen soon at home).

Tuesday (March 15). Five Somalis sentenced to life in prison by the court of Virginia (United States) for having attacked the USS Nicholas, a ship of the US Navy. It is the harshest sentence handed down in a western country. They expected a “return on investment” of $10-40.000 on the ransom.

Monday (March 14). A Spanish Basque tuna boat escape an attack. Txori Argi escapes a pirate attack in the Indian Ocean, 80 miles from the Seychelles. Security guards on board manage to repel the attack. This ship had already escaped another similar attack in November. A Spanish patrol boat will remain in the fishing area for the next few months to thwart any further attacks. 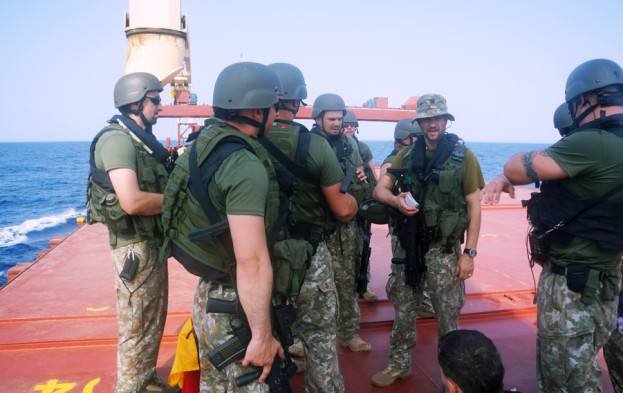 Lithuanians board a WFP ship

Koreans and Europeans thwart an attack in the Gulf