(BRUSSELS2, Exclusive) The text establishing the status of the forces deployed in Uganda for the Somali military training mission (EUTM Somalia) is ready (it was about time! more than two months after the start of the mission). It must be approved these days according to an accelerated written procedure at European level. This text will then be signed in Kampala, on August 13, between the Ugandan Minister of Defense and the EU ambassador in the capital, Vincent de Visscher.

This is the first time that an EU Head of Delegation has signed such an international agreement. Previously it was the ambassador of the country of the presidency who carried out this formality on behalf of the EU. For EUNAVFOR's SOFA in Kenya, it was the Czech ambassador who signed the agreement (1).

This is one of the consequences of the Lisbon Treaty, not (as is often believed) because of the attribution of legal personality to the EU (2) but quite simply because of the creation of a European independent external action. Several EC delegations have already switched as EU embassies either on January 3 (4), like that of Kampala (5), or on July XNUMX (XNUMX).

Semantic precision. The Treaty of Lisbon having abolished the distinction between military operations and civilian missions, we now only speak of a mission. And this text although regulating the status of forces (SOFA) is relative to the status of the mission (SOMA).

A mission of both civilian and military nature

Although EUTM is a "military" mission in the sense of the EU, the text signed is moreover halfway between "civilian" mission agreements and "military" mission agreements and clearly reflects the nature of “training” of EUTM. He thus specifies that “this mission does not perform operational tasks and is not authorized to use coercive measures without the consent of the host State”.

The provisions are fairly standard, with several articles on:

– identification (right to wear the European flag and the EUTM Somalia acronym), border crossing (no need for a visa, simplification of customs formalities, freedom of movement within the country);

– privileges and immunities (inviolability of EUTM Somalia facilities, archives and documents, correspondence, exemption from taxes, duties and customs duties on property and personnel, immunity from jurisdiction for property and persons, etc. );

– criminal jurisdiction (possibility for a contributing State to exercise all the rights of the country of origin over its personnel);

– uniforms and weapons (if the right to wear a uniform is fixed by the commander of the European mission, the carrying of weapons and ammunition is conditioned by
commander's “orders” “communicated to the host State”);

– the support of the host State (to find facilities, for the execution of commercial contracts);

– security (normally provided by the host state, but the EUTM mission commander can create a military police unit);

– compensation in the event of damage (with a three-stage procedure: amicable settlement, compensation commission, diplomatic or arbitration procedure).

(1) Read: Agreement on the treatment of pirates between the EU and Kenya initialed 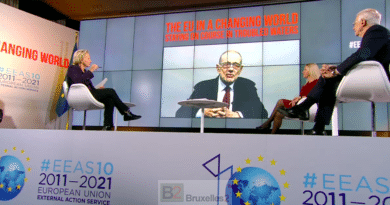 The Iranian nuclear (aka JCPOA). The intergenerational file of all the heads of European diplomacy

Greece prepares the arrival of armed private guards on its ships