(B2 – exclusive) The solemn declaration to set up the Takuba task force published at the end of March by Florence Parly, the French Minister of the Armed Forces, in the midst of a coronavirus crisis, committed a (small) oddity: the participation of the Czechs

It’s not a big deal in itself. It did not raise any high diplomatic cries. But it is embarrassing for a country that is a ‘good pupil’ of the European class when it comes to commitment to the Sahel and solidarity.

The Prague Government, together with that of Tallinn (Estonia), had nevertheless been one of the first to indicate its willingness to participate in this action by the special forces, a complement to Operation Barkhane, in the Liptako-Gourma, at the confluence of the three borders (Mali, Niger and Burkina Faso). This from November 2019! (read : Plusieurs pays européens s’engagent ou songent à s’engager au Mali opération Takuba). And this contribution has not been paid back, contrary to some promises (such as Norway).

The Czech Minister of Defence Lubomír Metnar had thus confirmed, during the meeting held by video-conference of the European intervention initiative on 27 March, “the approval of the proposal to send Czech troops to Task Force Takuba by the Government of the Czech Republic”. The only reservation, like the Swedes, is that Czech participation is subject to a necessary formality: the consent of the national elected representatives. Here again it is common knowledge (at least when one understands Czech). “This proposal [is submitted] to the Parliament, whose consent is necessary for the sending of Czech soldiers,” explained Minister Melnar.

The desire to stabilize the Sahel region

It is necessary “to reverse the current negative developments and remove the causes of instability in Mali and the Sahel by adopting vigorous measures in a unified way,” Prague added, thus agreeing with the text of the final declaration.

A presence already affirmed in Bamako

It should be noted that Mali is not a total novelty for the Czechs. Their forces have been providing the ‘protection force’ for the EU’s European training mission (EUTM Mali) almost from the outset, particularly at the Bamako headquarters and during ViP escorts. With efficiency, firmness… while keeping a smile on his face. And they will take command of the mission relaying the Portuguese in the second part of the year (read : Les Tchèques vont prendre le commandement de la mission EUTM Mali).

It is surprising to see Sweden (which is more of a drag on European defence) and not the Czech Republic, which are at the same point of progress (read: La task-force Takuba est créée. Une déclaration signée à onze. Quelques-uns s’engagent plus).

It is surprising that several days later, when this omission is known, no changes have been made. If it had been the UK or Germany, the correction would have been made within the hour, with a press release sent to all the press.

An inexplicable oversight, especially as the Prague Government is led by a member of the European Liberals and Democrats, just like Emmanuel Macron. Or perhaps the explanation is political: perhaps the promiscuity with a certain Andrej Babiš, a prime minister with a fiery temperament, closer in spirit to Viktor Orban, is doing the job.

The lack of defence solidarity among the countries of Central and Eastern Europe and their excessive Atlanticism is often criticised. This is sometimes true and sometimes not. The European spirit of these countries is often forgotten (cf. Box 1), particularly in France, where commentators love to point the finger at these “villains” of the East who are not as supportive as they are congratulatory. A certain balance needs to be restored.

Instead of constantly vilifying, we should rather be inspired. What is being done today in the Eastern countries is not stupid: the rapid reaction of the local authorities in the fight against Covid-19 has undoubtedly prevented some damage (see Box 2). Let us put aside our boastful side – such as ‘we are the best (in terms of health, the political system, defence, etc.)’ – let us listen more to other Europeans and benefit from their experience.

As far as equipment is concerned, while several Eastern European countries buy mostly US equipment (e.g. Poland or Romania), one of them stands out in particular, Viktor Orban’s Hungary (Fidesz/Christian Democrats PPE) which regularly buys ‘European’ (read: La Hongrie fait ses emplettes chez Airbus et KMW). For the Irini operation, the first country to have announced a real public contribution… is Andrej Duda’s Poland (Pis/Conservatives) (read: L’opération EUNAVFOR Med Irini sans navires, pour l’instant. La génération de forces se poursuit). And Ludovic Orban’s Romania (NLP/Liberal-Centrist) is one of the only European countries to have agreed to send (these days) a team of 11 doctors and nurses to Northern Italy as reinforcements in the fight against the coronavirus (read here). The reality is thus more contrasted than one would like to say.

2. The example comes from the East

One can note the extreme promptness of the Czech reaction in the fight against the coronavirus with the closing of the borders (which everyone did afterwards), massive purchase of masks and recourse to the army (read: Prague organise un pont aérien pour rapatrier masques et respirateurs de Chine). While France roars to the sound of war (see Emmanuel Macron’s speech), but still procrastinates on the massive use of masks and recourse to the army, the Czech Republic does not hesitate, it triggers an airlift. Result: the first Antonov-type jumbo jet landed in Prague on 23 March. It will take exactly one week (March 30) to have the same effect in Paris! This at a time when the coronavirus crisis is stronger in France than in the Czech Republic. If Edouard Philippe’s government had been quicker, a few more lives could probably have been saved (especially on the nursing staff side). 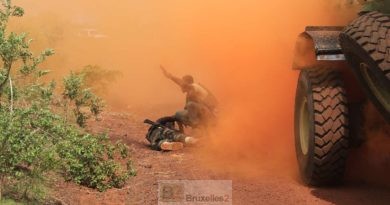