(B2) EU foreign ministers finally agreed* on Monday (17 February) to relaunch the European maritime operation in the central Mediterranean.

The return of ships at sea

The Austro-Hungarian obstruction was eventually defeated through a series of changes, including changes to the area of operations and the rules of engagement (read : La revanche de Piave. L’Autriche-Hongrie bloque. L’opération Sophia dans l’impasse). The return of the ships to the sea comes after a year’s interruption in naval activity and after a number of discussions and negotiations between ambassadors and even ministers by telephone in recent days, including at the highest level at the Munich Security Conference (article to follow).

The arms embargo in focus

The purpose of the operation is redefined. Or rather its objectives are re-hierarchised. It will focus primarily on the control of the arms embargo. The objectives of fighting human trafficking and the training of the Libyan coast guard and navy will become secondary.

The revised area of operations

European ships will be deployed more on the east coast of Libya, not far from Egypt. In order to control the arms embargo, this is more justified. On the one hand, it allows for the control of ships coming from the eastern Mediterranean: the Suez Canal for Emirati or Jordanian ships supplying the Haftar clan or Turkey supporting Tripoli. Moreover, having a presence not far from Benghazi (controlled, precisely, by General Haftar) is not useless either.

The operation will be conducted using all possible assets: naval, air, satellite and even submarine, all other information and intelligence tools. All states have pledged to contribute in one way or another.

The pull factor, the key to the agreement

A recall clause has been attached, which will help to convince the Austrians. The process of migrant smuggling will be closely monitored. If a further increase in traffic is detected in an area – what specialists call the ‘pull factor’ – then naval resources will be withdrawn from the area concerned. They can operate in another area if necessary, or return to port. It will be up to the operation commander – or the political authorities (the EU ambassadors) – as the case may be.

The name of the operation changed

Sophia is now part of ancient history“, proudly announced Alexander Schallenberg, Austria’s Foreign Minister, at the end of the meeting. The operation is no longer called Sophia. A name given in honour of a baby born on board one of the operation’s ships and too often connoted as ‘refugee welcoming’ for several countries. However, she will continue to be named EUNAVFOR Med alongside the name of a Greek God of the Sea who had a large number of offspring. All the details have yet to be finalised.

A new decision to be written by March 23rd

Military specialists and EU ambassadors are being called in tomorrow to clarify everything. Deadline: the next meeting of foreign ministers on 23rd March. Just in time for the deadline of Sophia’s current term of office: 31st March.

*The Foreign Ministers agreed on 9 points, which are as follows: 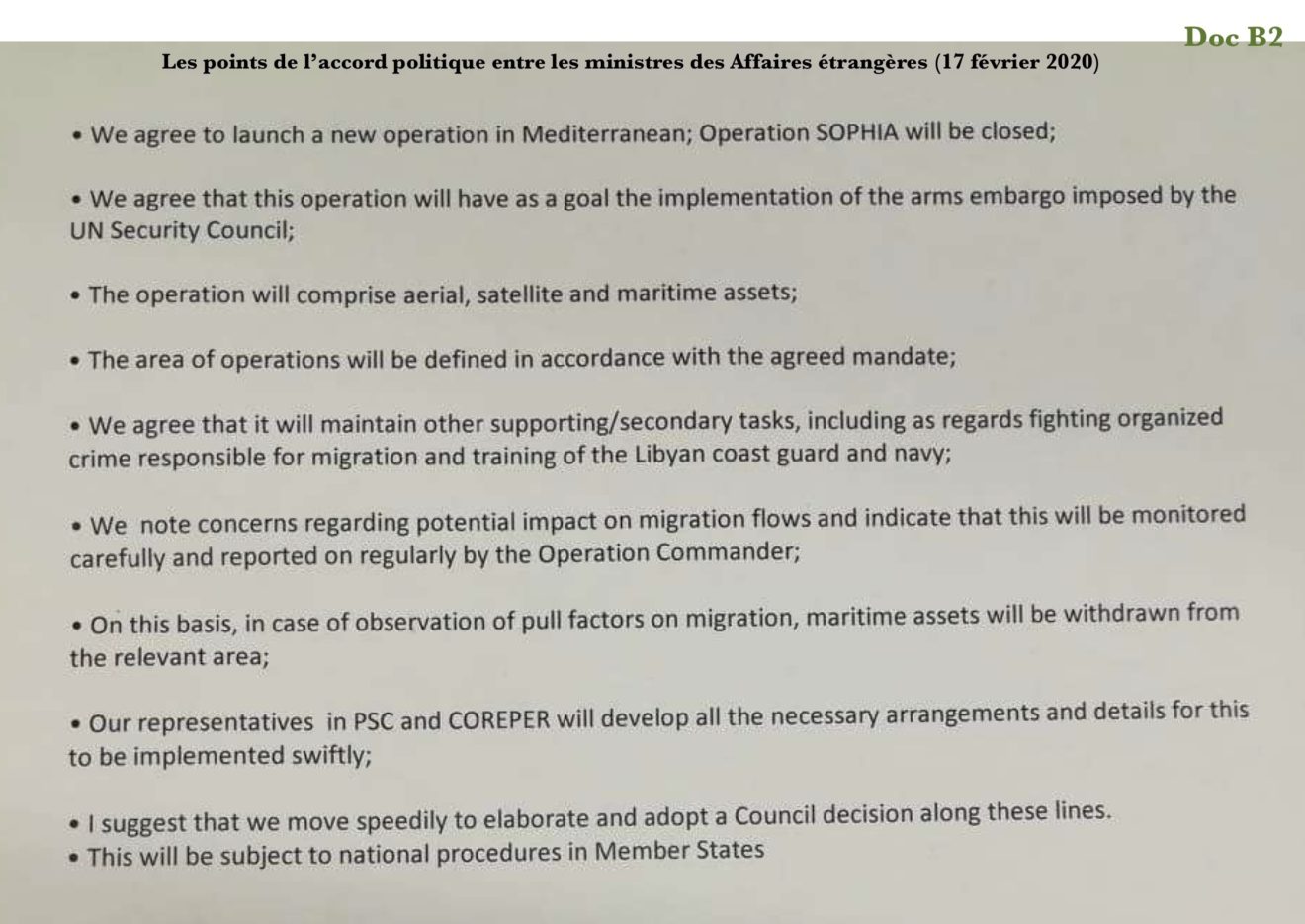