B2 is regularly cited and taken up in the international press (print, TV, radio, online press) — as in official reports or in miscellaneous books and works 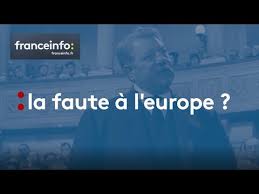 RTBF Radio – Le + de matin première, 7:30 a.m., August 3: Jean-Claude JUNCKER has appointed Britain's Julian KING as European Union Security Commissioner. He will be in charge of fighting terrorism and organized crime Who is Julian King? Is it well played on the part of JUNCKER to create this position now? What more can Europe do in this matter when we are talking about national competence?

RTBF Radio – La Première 7-9 – Expresso by Georges Lauwerijs
Hostage of OSCE observers: a very serious warning of a change of course in the Ukrainian crisis. “The goal is to intimidate and internationalize the crisis. a crisis which until today opposed the Ukrainians and the Russians. There is a desire to hold the international community hostage." Listen here

“A woman at the head of the European Council? It's not a consolation prize. However, women are under-represented in European institutions. The current Commission has nine women. And according to the information site Bruxelles2, in only five Member States (out of twenty-eight), there is currently talk of perhaps proposing a woman as a member of the next Commission. Belgium is not among them. But if the CD&V is in the next federal majority, and if it maintains that it is its turn this time, the MEP and ephemeral president of the party (2008-2010) Marianne Thyssen could, it is whispered, garnish the ranks of women in the next Commission.”  Article by Maroun Labaki, Le Soir (April 2014)

Poland will contribute to Sangaris – The World [Checklist] (December 2013)

The debate: the Syrian drama, or the cacophony and European impotence (October 2013). “Crossroads of Europe” By Daniel Desesquelle
Listen (26:31)
Download

The “red lines” on the use of chemical weapons in Syria and the presence of Europeans on the political solution –  LCP / Public Senate Emission EuropeHebdo (Fr) (June 2013). (see video 8'50 for the photo report, 10'30 for the interview).

The inscription of Hezbollah on the anti-terrorist lists – As Nafir Lebanese daily (June 2013). Download the article

The division of Europeans on Syria – RTBF Morning Premiere  (may 2013).
Read also: Syria, can we still believe in diplomacy?

The Role of EU Battlegroups – RTBF The First (February 2013)

Is Europe in a state to organize its defense – BFM Tv

Belgium is committed to Mali but on the front line. Metro (January 2013). Download thearticle

Europe Hebdo – What are the Europeans going to do in Mali, 3 operations in one – Download (November 2012)

At NATO, François Hollande talks to journalists… French –  Europe Download1 The Lab (May 2012)

Somali pirates raking in the ransoms – Voice of Russia (December 2011)

Media: How to get information, in French, on European news? – Slate (March 2011)

Air safety: pending a global blacklist… About the crash of the Yemenia airways – Radio-Canada (June 2009) Surfer