(B2) With its childish quarrels, warlike attitudes, and insults to European leaders or peoples, Ankara has angered and worn Europeans out. Simply stupidly…

Helsinki and the Turkish enthusiasm

It seems a long way from the time of the Helsinki Summit in 1999, when, with some enthusiasm, it was decided to open the door to accession negotiations with Turkey (1). That European summit marked a turning point in the history of relations with Turkey. In the conclusions it stated : “The European Council welcomes recent positive developments in Turkey […] as well as Turkey’s intention to continue its reforms towards complying with the Copenhagen criteria.”

Turkish provocations ended up wearing out the Europeans

Exactly 21 years later, we would have to reverse every single word in that sentence for it to make sense . Europe deplores Turkey’s lack of progress, its provocations, “its unilateral and provocative activities”, etc. If only a few months ago, several countries had doubts on the attitude to have with Turkey, on the need to engage in dialogue, on the means behind Turkey’s actions (political declarations, withdrawal of ships…) which were sometimes perceived as so many tokens of good will from Ankara… Today, “nobody is fooled anymore”. A sentence often repeated by different European officials. No leader seriously believes anymore that a single movement of ships, or a Turkish call will change the situation.

The magic alliance is broken

In just a few months, the Erdogan regime typing all over the place (Northern Syria, Libya, Armenia, Eastern Mediterranean, …) convinced everyone that there was something broken in the alliance, however magical, between the economically solid Union and the large country at the door of both Europe and the Middle East. But Europeans do not want to break it all. This evening the Europeans are expected to take sanctions, but fairly gradual ones, while staying faithful to the European spirit particularly to what Berlin wanted — that is to always keep an open door in case of a change in attitude (to read: Turquie. Les Européens ne veulent pas couper les ponts. Vers un dispositif de sanctions élargi ?).

Graduated sanctions do not mean weakness

However, this “kind” gesture should not be underestimated. Such a double edged process vis-à-vis a country that is theoretically still a candidate for membership of the European Union equals closing the door on it. In other words, to acknowledge that it no longer “meets the Copenhagen criteria”. Among the member countries of the Atlantic Alliance, this is a singular and rather unequalled fact so far. We also know that while sanctions can sometimes be slow to come, they are even slower to undo. Once the movement is set in motion, the machine is unstoppable.

Beware of the sleeping marshmallow

Like the marshmallow, Europe can seem weak, a little soft and indecisive. But make no mistake. Once unity is achieved, it is very difficult to break the line. Ankara should be wary. Russia has tried on several occasions to bend the decisions of sanctions it is under at its own expense. Despite a few rough patches Europe remained on its feet and united. Once again this evening the economic sanctions that have been hitting Moscow for its attitude in Ukraine have just been prolonged. The same goes for the United Kingdom in the Brexit affair. For four years, the British leaders have tried almost everything to bend the European’s approach. Each time they have broken their teeth on their solid unity. And yet they had far more arguments than the Turks for  a change in direction. 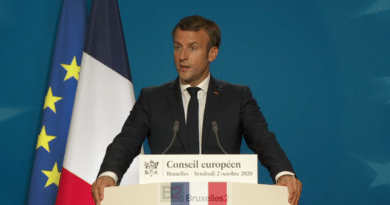